Had a little getaway last weekend with my Friday off, down to northern New Mexico. My stated goal was to visit the Abiquiu home of Georgia O’Keeffe and spend a few minutes among her things, her space; to breathe that air and feel that light upon my skin. It’s not that I’m a huge O’Keeffe fan, although what’s not to like? But I like her era, the aesthetic, the value placed on truth, beauty, and a place in space. She so embodies this corner of the world that it is a rich feeling to inhabit that world however briefly. Then I went to her museum in Santa Fe to walk among the gifts she left behind.

I also revisited a place and time of my own past, from nearly 20 years ago when I was trying to make sense of art and life. I always come back to something Anne Morrow Lindbergh wrote as she was trying to meet the demands of flight, navigation, motherhood, and writing: “Living is a more important art than any other.” I’ve taken comfort in that thought over the years as I’ve failed in art but succeeded greatly in my own odd way at life.

In 1993 I visited a friend in Taos and we climbed this funny little three-eared mountain out on the mesa. My friend had immortalized in photos and books the mesa, the stock ponds, the lichen-covered rock, and the mountain, Tres Orejas. In my week there we visited the stock pond, stole—stole!!—the lichen-covered rock (I should be famous in certain circles for that act alone, but the act went undocumented for fear that someone [who, pray tell!] should bring a federal case against the famous author), and we climbed Tres Orejas. We bumped along the bad road in his old pick-up, rattletrap is the word he likes, until we could drive no further. We continued on foot along around to the backside of the mountain and began our ascent of the middle ear.

Tres Orejas is not a mountain as much as it is a semi-structured pile of rocks. I will quote Hemingway talking about bulls now because in my imagination it is relevant, and I’ve always enjoyed Hemingway as has my Taoseno friend.

“They’ve got bananas for horns,” said the critic.

Tres Orejas is not tall, but it is not bananas. The lack of trail and the stony rockiness of it make it not bananas.

I believe this was my first mountain and it’s kind of interesting to revisit it now. For not being a very big mountain, I don’t suppose it’s more than a thousand feet up, the view is stunning. The Carson Mesa below has been developed with off-the-grid houses in the past decades, but it still looks wild. The slope of the hill hides the big settlement to the northeast.

I think, on reflection, that this is where I fell in love with ravens and mountains and the west. In 1993 we watched a pair of ravens playing in the thermals at just about our altitude. They actually performed synchronized barrel rolls. Today I watched a hawk on the thermal, silhouetted, perfectly still on the air.

It’s kind of a harrowing trip to the mountain. Despite the housing development, the road to Tres Orejas is as frightful as it was in ‘93. My thought as I neared pavement at the end was this: Happy to report that the Carson Mesa is still nearly impassable; a Subaru and a case of idiocy, however, can apparently get you through. I approached from the south and drove a rocky road up the south flank. I finally could stomach no more of the road and gave the car a break at what looked like a likely approach to the south ear. I followed a faint wood-gathering road partway up and then simply bushwhacked/rockwhacked my way to the point of the south ear. The point was too much of a real rock climb for me to feel comfortable doing alone. Well, I was sorry the whole way that I was stupid enough to be there alone. Probably not safe, but I comforted myself with my excellent cell phone reception (warning bells should be going off in your mind right now). I carefully picked my way around the south ear, alert for rattlers, making all kinds of sounds to frighten them off.  Gazed across the saddle at the middle ear and decided that I’d come that far may as well continue. I knew the middle ear was accessible as I had been there before. Yes, I was 24 then, but I was also a sea-level smoker. I’m so much more kick-ass now.

Achieved the middle ear with little fanfare. Stayed long enough to enjoy the view, the wind, the lichens on the rocks, the peace that comes arriving on top of a mountain. Exquisite. Even as I feared making my now-tired legs go back down those rocks. Fortunately, one of the benefits of age is knowing things like this: nothing like good boots, good tires, and slippery-butt double-walled pants to get the adventurer out of a pickle.

Driving out from Tres Orejas to the north/northeast the roads are equal crap the whole way, but not without karmic comic relief. I was picking along a section of not rocky but rutted road, and was thinking to myself that when it rains the road must really gum up, out here across the Carson Mesa. Then I came around a bend face to face with a late-model Toyota truck…and the universe smiled. All those years of driving the Jeep and getting out of people’s ways even when it wasn’t my responsibility and it wasn’t even maybe easier for me, it all just paid off. The guy without hesitation climbed the bank in his Toyota pick-up truck and let me drive by. I laughed and waved and thought, there is goodness in the world.

Upon achieving pavement, I remembered the treat in the cooler. A long-standing tradition of my Taoseno friend was to have treats in the cooler for post-hike reward. Cheese sammie, beer, vodka, whatever. My first summer as a westerner at Bryce Canyon, I carried a cooler in my old F250 stocked with squirt soda for my post-hike treat. I’d forgotten about such luxuries, but in honor of old times, I’d picked up an orange Fanta and stashed it in the cooler. I suppose it was my car that really deserved the treat, but dang! I enjoyed that cold orange soda.

Drove over the Rio Grande on the high bridge and south toward town to buy a chili ristra for culinary and decorative enrichment. Ay Juanito! The Chamisaville north/south still sucks eggs. Ristra in tow, sagebrush extracted from under the car, I pointed north and promised myself next time I would spend a little longer. 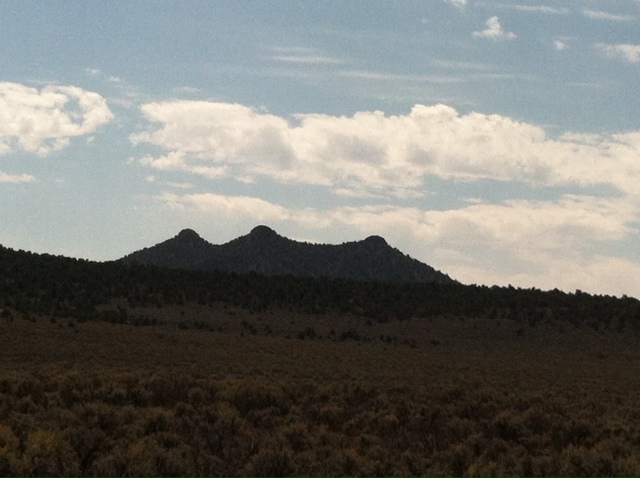 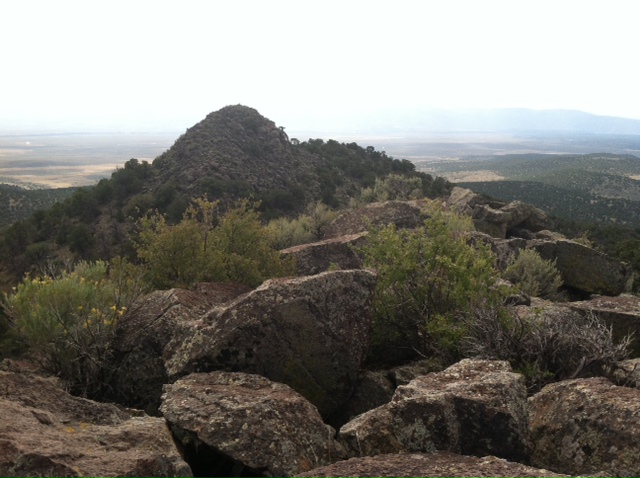 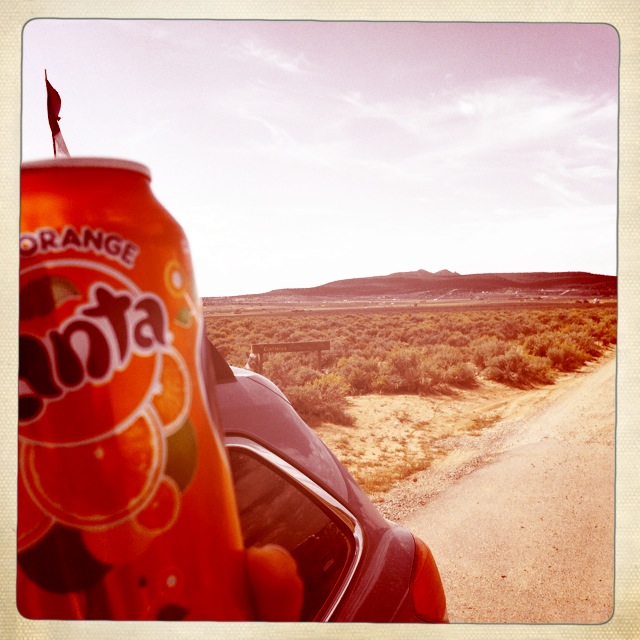